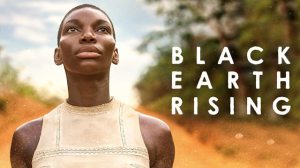 RATING: 🤷🏾‍♀️ (punting on a rating for reasons discussed)

WHERE CAN I SEE IT? Available to stream on Netflix starting 25 January 2019

I’m not so hot on political thrillers, hence, the 🤷🏾‍♀️ rating. But I am hot on Michaela Coel and I’m excited to see her getting to do a dramatic role. We knew she could do slapstick (see this blog’s first review ever for Chewing Gum), but she’s riveting in Black Earth Rising. She’s a soulmate to Meredith Grey and Christina Yang: dark and twisty.

Is that adequate attention to Michaela Coel’s acting so that it doesn’t seem like I’m objectifying her before I start going on about her cheek bones, amazing lips and skin I’d probably sell my non-existent first born for?

We’re introduced to Coel’s character, legal investigator Kate Ashby, in her therapist’s office. For someone who’s attempted to kill herself, Kate’s deadpanning her way through a quizzing by her therapist quite winningly. Kate’s survived the genocide in Rwanda and since been adopted by Eve. Eve is a British, international lawyer charged with prosecuting a militia leader for war crimes committed during the genocide for the International Criminal Court.

Though Kate begs her mother not to take the case, Eve does it anyway. Her stated purpose is justice and a higher human rights calling, but given how little Kate knows about her background, you start to wonder: what’s Eve not telling Kate? Is she protecting her daughter from the brutal realities of genocide and displacement in her past? Or is there a larger narrative that will unfold over the course of the eight-episode arc? It will be up to Kate to learn the truth. And you’re not sure she even cares to learn the truth, which make her ambivalence all the more curious since everyone around her seems to be working hard to keep the truth from her.

And that’s about all I can tell you without spoiling. If you’re into global politics and the ramifications of colonialism and its aftermaths from the perspective of the British, Black Earth Rising will hold your attention. It’s less an espionage thriller and more of an international whodunit, whytheydunit and who’s about to get done. As mentioned, I can take or leave political thrillers, but there are some heart-pounding and tense scenes that had me gasping and shouting, “No!” Coel acquits herself quite well in a leading role that’s required to be intense, strong, but also with glimpses of vulnerability.

Two side-notes. First, yassss, Netflix, bring international audiences the UK productions that the BBC and other entities seem too clueless to bring to us faster! Seems like the crazy demand for content! content! content! is going to, hopefully, mean that American audiences don’t have to wait forever for quality programs to show up on this side of the pond. Britbox and Acorn are shite and not cutting it. STOP STARVING YOUR AMERICAN CA$H 🐄.

And, second, maybe I’ll start rating the theme songs for shows. Like other noir dramas, the theme song for Black Earth Rising is so over-baked. Leonard Cohen is, of course, a king, but what does his song, “You Want It Darker” have to do with any of the themes of this show? You can read the lyrics yourself and see if they match Kate’s inner struggle. I very much prefer the brief atmospheric music bed and cold open. Theme songs are so 20th century.